The War Is Over 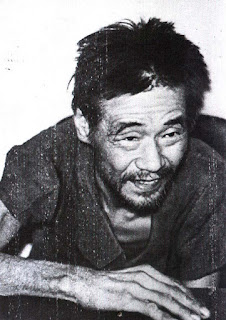 Today, I woke up with an image in my mind. It's of Shoichi Yokoi, the Japanese man found hiding in the jungles of Guam 27 years after the war was over. He didn't know the war had ended. He continued to hide in the jungle because in his mind, there was danger. There was a threat to his existence. So for 27 years, he merely survived. Life passed him by.
This image has come to me because that is how I feel my husband has been living for the past 6 months. No doubt, there definitely was a war. The two of us were at war. Day in and day out. There were weapons, casualties, injuries, and destruction. There was great loss. But the war ended. We survived. We sought help, mediators, counsel. We acquired the tools to live in peace. We figured out why the war started and we identified the crimes that were comitted by both sides. I know the war is over, but does he?
He is living like Yokoi. Surviving. Hiding. Letting life pass by around him. Choosing to stay away from his family and be alone. Perhaps he is afraid of another war, but the war we were fighting is truly over. Maybe Yokoi did hear that the war was over, but refused to believe it too....maybe. Maybe Yokoi feared that at any point in time he could be taken prisoner. How can you ever believe that there will be peace again? It IS possible. The majority of the soldiers did belive it and went back to their lives, injured, traumatized, but wiser and more aware of the gift that was their life as they knew it. But Yokoi stayed in that jungle imprisoned by his fear. Imprisoned only by his mind and what he did not know. And he emerged an old man in a world that had continued without him.
Read more about Shoichi Yokoi here: www.en.wikipedia.org/wiki/Shoichi_Yokoi